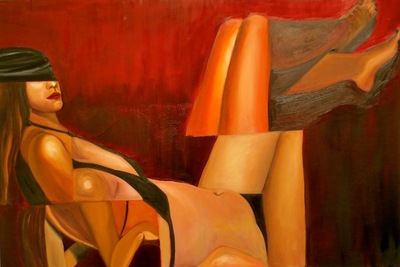 I see potential in painting the figure. To be able to draw or paint the human form is a strong technical building block of becoming an artist. But what I seek far more interesting in the figure is the various perspectives it may receive from its audience such as the curves of the body, the anatomical structure, and the various body types.

Influenced by David Hockney’s photo collaging, I have been taking photos of my models from all different angles, lighting, zoomed-in/out, and other ways to exploit the body. Then I printed out the images and worked with each image as it if were a puzzle piece. It is also the repetition of the body parts that may give different perspectives of each woman. El Greco uses very deep contrasts in lighting in his art along with exaggerated parts to portray the body. In a similar manner, I would use different natural or florescent lighting to paint the body along with exaggerated features of the model.

As a result, I hope my work can come across to the audience not so much sexually or visually pleasing but blissfully peaceful: how women can be witnessed for their differences along with their beauty.