Push From the Bottom 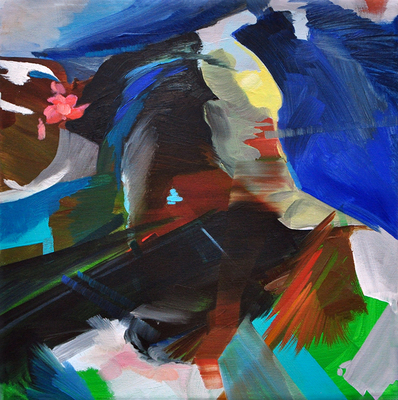 I am a woman, a spouse, a friend, a visual artist, a scholar, and a teacher created in the image of the triune God. I am forgiven and have a lifelong and prayerful relationship with Jesus Christ through the power of the Holy Spirit. I am a fallible, broken, redeemed child of God. I hold that human relationships are bound together by the Holy Spirit, through risk-taking in conversation and in endeavor. Faith is the foundation of who I am, and thereby, what I do.

I hold that the visual arts tap into the core of humanity. Made in the image of the creator God, humans, in our diversity, have a mandate to create and uniquely express ourselves. As a painter, my work has roots in traditional landscape painting, and is greatly influenced by the landscapes/places in which I exist (and have existed) – whether long-term or temporary. As the daughter of a career military man, geography regularly changed, but a constant was my grandmother’s painting studio. By her example, I learned what it meant to live out faith in community through creativity. In light of this example, my work has become a personal and faith-filled reflection of the individual – me – born out of a deeply held desire to reflect and actively interpret place.

For the past year, I have focused on a body of work that explores Istanbul’s multicultural make-up and complex history as is plays out across the breadth and depth of the city. I traveled in and out of the city to visit a variety of locations that were once important Christian and Byzantine sites. While on location, I observed and photo-documented structures, as well as the social and cultural dynamics that played out within these locales. I found myself interested in the social dynamics that played out amongst genders, and juxtapositions of western and non-western modes of adornment and representation seen in the contemporary women of the city.

I was challenged by the western ideologies I bought with me into Istanbul. As I continued to observe and look closer at social interactions, I noticed groups of women walking together – seemingly close friends – adorned in everything from conservative dress to Daisy Duke shorts. This city and it rich history became, in front of my eyes, flexible and constantly changing. As I continued to engage the city, its flexible nature became contingent on my engagement and willingness to observe social and cultural exchanges without the lens of western ideologies. I fluctuated in and out of confusion and understanding about what I was seeing and experiencing. I sought to discover and render the many layers that have taken this city from the seat of the Christian empire to the secular, yet pluralist, seemingly post-Christian place that enveloped me.

These tensions ultimately resulted in paint on canvas. Istanbul challenged my ability to find an appropriate expression for its seemingly endless layers. The importance of a dialogue between the paintings and their viewer rests on encouraging recognition of Istanbul in its various social, historical, political, and sometimes fantastic layers and moments. It is a dialogue about my way of seeing and representing the city, and the necessity of complicating that vision through its endless layers of growth, stagnancy, depression and renewal. In this experience, I have seen and attempted to render these layers as I have ultimately discovered their echo of the innumerable layers of a life of faith.